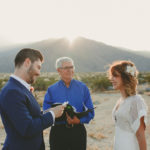 There are some people who believe that a wedding ceremony can’t be truly meaningful without some element of the divine. However, many couples engaged to be married want to focus on the human experience when they say their vows. Here are some hiring do’s and don’ts. Having a non religious wedding ceremony (also called a humanist wedding ceremony) let’s brides and grooms begin married life with vows that are significant but also grounded in the here and now.

Non religious wedding ceremonies tend to be focused on what a lifelong relationship between two people means and why a couple is choosing to get married. They let couples express what matters to them with a wedding that’s much more personal than a civil ceremony performed at city hall.

A non religious ceremony lets you get married how you want, where you want and when, free from restrictions imposed by some faiths. It also means you can choose from a wider variety of officiants, from friends and family to clergy to justices of the peace. There doesn’t need to be a set script – you can work with a non denominational minister to create a ceremony that is tailored to your needs and wants. The tone, the music, and even the wording can be customized to be just what you want.

Having a non religious wedding ceremony doesn’t mean you’re an atheist or even agnostic. Many couples who come from different religious backgrounds choose to leave their faiths out of the wedding to make things less complicated. A humanist wedding can be the perfect solution when a couple is trying not to offend families who are on the lookout for inequities.

Most secular weddings have vows, rituals, flowers, rings, a reception, and a kiss at the end of the ceremony, just like traditional religious weddings. However, the ceremony script will likely speak more to the big step the couple is taking than to their relationship as it relates to the divine. And of course it goes without saying that couples who choose non religious weddings are every bit as married!

If you’re planning a non religious wedding ceremony just make sure that the wedding officiants you interview know that you want to keep things secular. Because religion is such an integrated part of American culture, some celebrants may use religious elements in their standard ceremonies as a matter of course. But non denominational ministers will always respect your choice of focus and create a ceremony that reflects your values.

With impeccable attention to detail, all of our wedding officiants provide exceptional service at an affordable price that is competitive with other Riverside County wedding ministers and officiants.